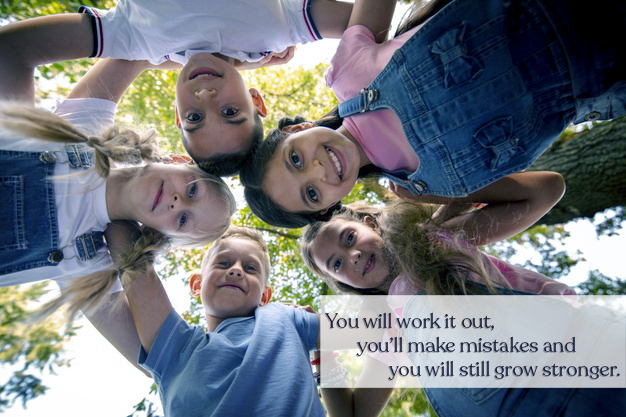 Many of us know someone with whom we feel uneasy. A difficult friendship is something that can creep up on anyone – from playgroup, school or even in work or at the care home in later life.

Katie, 12, found her classmate, Ella, really hard to be around. Ella constantly mentioned things she didn’t like about Katie. When Katie went home and told her Mum, she was told she “shouldn’t be such an easy target”, which felt just as critical. When Katie had to wear a brace, she felt really shy and awkward. People would often mention that she wouldn’t look them in the eye – she felt ugly and worthless. Ella kept telling her she would look better with a really short haircut, but when she had her hair cut short, everybody laughed and said she looked like a boy. Pretty soon she started worrying that she wasn’t getting boobs quickly enough and secretly, Katie felt it was all Ella’s fault.

When Katie and her Mum came to see me, I began by helping Mum to listen more and to help Katie to see that her life wasn’t ruined.

In my second book I wrote that “People who feel bad about themselves often behave badly” but that’s not the only reason people behave badly. I worked in prisons for a while and discovered that some of the world’s most dangerous criminals think they are the bees-knees. Sometimes, though, people behave badly because they are jealous or frustrated that they can’t get their point across. Some people have impulse control problems and find controlling their behavior difficult.

Katie had been frustrated and felt her parents weren’t listening to her. I asked her if that had ever made her shout at them, and she said that it had. It was a bit of a sneaky question really because all 12 year olds shout at their parents sometimes – living with other people is hard and we take each other for granted sometimes!

Being misunderstood is one of the most painful things in life. It is hard to handle the differences between people. Ella might be someone who takes criticism really well, and perhaps she didn’t realise how much what she said was upsetting Katie. We can’t know what is going on inside another person’s head and we waste a lot of effort trying to work it out.

It wasn’t my place to tell Katie whether or not her friendship with Ella was good for her. Katie didn’t feel it was, while her mother thought the opposite. I thought the truth was probably half way in between. It is true that what doesn’t kill us makes us stronger, so facing constant criticism would likely toughen Katie up. Some of the strongest women I know grew up with older brothers who would tease, criticise, bite and kick: Having said that there are probably lots of girls whose brothers almost defeated them. Everyone is different. Sometimes we should avoid spending time with people who aren’t kind and supportive, and sometimes we need to face up to them and say no, you don’t get to do this to me.

I talked Katie through some strategies for laying down boundaries in her friendships, so she could feel safer – but she also wanted permission to avoid someone who didn’t help her to feel good about herself. I told her that was ok and she was pleased to hear it.

Check out our COACHING PROGRAMS for children.

We can all take positive steps to avoid being steamrollered by a stronger character.

Here is some of the advice that I offered to Katie to cope with her friendship problem:

Recognise whether you are acting inferior and then complaining that you are being treated as inferior. In other words, take responsibility for the role you play in the relationship. If you play the victim, you may well be abused.

People feel bad when nobody is listening to them, but the most important thing is always to listen to yourself. You could write down your feelings, or draw them out, record a video about how you feel or just notice your feelings without beating yourself up for them.

Trust yourself to know that at the right time you WILL speak out, and you’ll feel better for it. Confrontation can be painful for a sensitive person but some people need to be told that what they are doing is hurtful. Not everyone is as sensitive as you are, and sometimes an argument really does solve problems, even though we don’t like to feel like we have lost control.

Just be yourself and allow yourself your feelings. Only you know whether a particular person is good for you or not, and time will tell whether walking away, taking it in your stride or saying your piece will work best. You will work it out, you’ll make mistakes and you will still grow stronger.

More about the psychology behind child friendships here.